Pilates method was invented by Joseph Hubertus Pilates (1880-1967). Born near Dusseldorf, Germany, Joseph H. Pilates had a lifelong interest in body conditioning.  As a frail child suffering from rickets, asthma and rheumatic fever, he dedicated himself to becoming stronger.  He improved his health and physique by studying anatomy and various forms of exercise. At the age of 14, he had been so successful in his endeavors that he was asked to model for anatomy charts.

Around 1914, Joseph H. Pilates was already an accomplished performer, gymnast, skier, diver and boxer living in England.  At the outbreak of World War I, he was placed under forced interment along with other German nationals in Lancaster, England.  There he taught fellow camp members his concepts and exercises that he developed over his 20 years of self study and apprenticeships in Yoga, Zen and ancient Greek and Roman physical regimens.  It was at this time that he began devising the system of original exercises known today as “Pilates Mat-Work”.  He called this regimen “Contrology”.  A few years later, he was transferred to another camp, where he became a nurse/caretaker to the many interns struck with wartime diseases and physical injuries.  Here he began devising equipment to rehabilitate his “patients”, by taking springs and attaching them to hospital beds. This system formed the foundation for his style of body conditioning and specialized exercise apparatus, which he brought to New York City when he opened his studio in 1926. 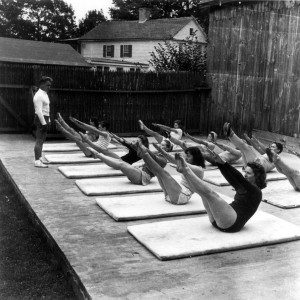